Obama Picks IT Nemesis Tom Perez to Be Secretary of Labor

March 18, 2013. President Obama gave a speech in which he announced that he will nominate Tom Perez to be Secretary of Labor. Perez is currently Assistant Attorney General (AAG) in charge of the Department of Justice's (DOJ) Civil Rights Division (CRD).

Perez and the CRD Deputy Assistant Attorney Generals have asserted by administrative fiat authority under the Americans with Disabilities Act (ADA) to regulate web sites, a wide range new information technologies, and IT devices.

He has won the distrust and enmity of some Republican Senators, but not because of his stands on regulation of IT. Perez has a troubled and confrontational relationship with some Republicans on the Senate Judiciary Committee (SJC) due to issues such as federal regulation and oversight of voting, and his disregard for the language of some statutes.

For decades this post has been held my mostly controversial and ideological nominees who have been criticized by members of the opposing party. Nominees for CRD AAG have tended to come from the political edges of their parties. Because of this, and the inherently political and ideological nature of some of the tasks of the CRD, this post has not been a stepping stone to higher federal office. Hence, the President's effort to elevate him to the cabinet level is both unusual and risky. 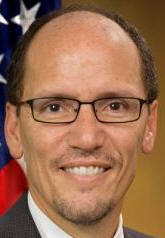 Perez (at left) claimed in a speech on July 26, 2012, that "the ADA applies to websites". And, he threatened that "Companies that do not consider accessibility in their website or product development will come to regret that decision, because we intend to use every tool at our disposal to ensure that people with disabilities have equal access to technology and the worlds that technology opens up."

Prior AAG's have made such assertions, but not as broadly as Perez. Also, Perez, like those who threatened the IT sector before him, has failed to follow through. For example, he initiated four rule making proceedings in 2010. But, to the good fortune of innovation, technology and the US economy, he has not completed any of these.

The CRD released these APNRMs three months before the 2010 midterm elections. It solicited comments. The election passed. The rest was silence. The CRD might have sought supplemental comments, or to refresh the record. But, it did not. The next step would have been to issue NPRMs. But, the CRD issued none. Two years and eight months after the release of the ANPRMs, there are no rules.

Sen. Tom Harkin (D-IA), who was first elected to the Senate in 1984, is not running for re-election in 2014. The first time that a CRD AAG asserted authority to regulate IT under the ADA was in 1996, in response to a letter from Sen. Harkin. See, September 9, 1996 letter signed by Deval Patrick.

The Clinton CRD then did nothing to implement the Harkin letter. Although, four years later, just before the 2000 election, it filed an amicus curiae brief with the U.S. Court of Appeals (5thCir) asserting that Title III applies to web sites. Both the District Court and the Court of Appeals held that Title III applies only to physical places, and not to the web site defendant. See, Hooks v. OKbridge, 232 F.3d 208 (2000).

The Bush CRD did not implement the Harkin letter. It made no public statement regarding the subject. For eight years DOJ employees declined to answer questions from TLJ regarding the issue.

The Obama CRD, under the leadership of Perez and DAAG Samuel Bagenstos (who is now at the University of Michigan law school), resurrected the 1996 letter and asserted that the CRD position had been clear and consistent all along -- that the ADA applies to web sites and IT.

First, the CRD took actions under the ADA directed at Amazon Kindle e-book reader devices. Cognizant of the weakness of its position, the CRD did not sue Amazon, but rather reached negotiated settlements with university users of Kindles. See, story titled "DOJ CRD Regulates eBook Reader Design" in TLJ Daily E-Mail Alert No. 2,080, April 26, 2010.

Second, the CRD's Bagenstos testified before the House Judiciary Committee's (HJC) Subcommittee on the Constitution, Civil Rights, and Civil Liberties, asserting broad authority under the ADA, and stating that the CRD would write regulations. See, story titled "DOJ CRD May Write Regulations to Expand the ADA to Cover the Internet and Information Technologies" and related stories in TLJ Daily E-Mail Alert No. 2,080, April 26, 2010.