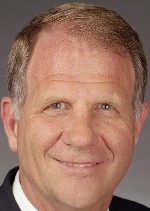 Both HR 4216 and HR 6654 were referred to the House Judiciary Committee (HJC). Rep. Poe (at right), and the other sponsors are members.

The HJC's Subcommittee on Crime, Terrorism, and Homeland Security (not the Subcommittee on Intellectual Property, Competition, and the Internet) held a hearing on March 28, 2012, on several bills, including HR 4216. See, hearing transcript and record.

Neither the HJC nor any of its Subcommittees took any further action on HR 4216. Also, HR 4216 is similar to language contained in Title VI of both S 1866 [LOC | WW] and HR 3476 [LOC | WW], both titled the "American Growth, Recovery, Empowerment, and Entrepreneurship Act" or "AGREE Act".

This DBP notice states that these new rules "allow CBP, subject to limitations, to disclose to an intellectual property right holder information appearing on merchandise or its retail packaging that may comprise information otherwise protected by the Trade Secrets Act, for the purpose of assisting CBP in determining whether the merchandise bears a counterfeit mark."

The CBP manages border and point of entry operations. This includes enforcing laws pertaining to importations of merchandise bearing recorded trademarks or recorded trade names, and circumvention devices banned by the DMCA.

However, in 2008 the CBP interpreted the Trade Secrets Act, which is codified at 18 U.S.C. § 1905, to bar this practice of sharing information with rights holders. Section 1905 is a broad criminal prohibition of disclosure of information by officers or employees of the federal government of certain trade secrets, proprietary information, and certain confidential commercial data that they obtain in the course of investigations.

Currently, the Section 1905 provides as follows: "Whoever, being an officer or employee of the United States or of any department or agency thereof ... publishes, divulges, discloses, or makes known in any manner or to any extent not authorized by law any information coming to him in the course of his employment or official duties or by reason of any examination or investigation made by, or return, report or record made to or filed with, such department or agency or officer or employee thereof, which information concerns or relates to the trade secrets, processes, operations, style of work, or apparatus, or to the identity, confidential statistical data, amount or source of any income, profits, losses, or expenditures ... shall be fined under this title, or imprisoned not more than one year, or both; and shall be removed from office or employment."

This 2008 CBP interpretation made it more difficult for the CBP to block importation of counterfeits, and circumvention devices banned by 17 U.S.C. § 1201. This interpretation had the effect of harming rights holders, consumers and public safety.

Rep. Bobby Scott (D-VA) wrote in his prepared testimony for the March hearing that "While I support the bill's goals, I cannot support the measure in its current form. The samples and images that the bill would allow" CBP " to release to rights-holders will include tracking and distribution codes that identify proprietary and confidential supply-chain information, even though these codes serve little if any purpose for the process of determining the authenticity of a product. Lawful importers will not have any protection or recourse from the release of this information."

Rep. Scott (at right) added that "I hope the bill moves forward, that the compromises will include guarantees that importers and exporters will have many a meaningful role in verifying products' authenticity, and also provide for penalties against rights-holders that knowingly provide false information to Customs and Border Patrol to damage a competing legitimate importer."

Gilbert Sandler, who testified in March on behalf of the American Free Trade Association (AFTA), stated that HR 4216 "lacks any of the safeguards we think are important to preserve legitimate parallel market trade."

HR 4216 is a short and somewhat strait forward bill that would amend the Trade Secrets Act to clarify that the CBP can forward information, and samples, to rights holders and other injured parties.

HR 6654 is a longer bill. It would amend the Trade Secrets Act with language almost identical to that of HR 4216. The main difference is that HR 6654 adds a provision that this amendment applies only to "tangible goods presented to" the CBP. Digital goods are not affected.

HR 6654 would also add a section titled "Prevention of Importation of Manufactured Goods Bearing Infringing Marks" that would amend Section 42 of the Lanham Act, which is codified at 15 U.S.C. § 1124. It would establish procedure for CBP sharing of information with rights holders.

Both also would provide that it is not a violation of § 1905 for the CBP, "after a determination is made that merchandise is in violation" of § 1201, to provide information enumerated by the bill "to persons injured by such violation".

Critical merchandise is also defined to includes aircraft parts, drugs, food, and "devices", among other things.