July 19, 2012. The Senate Judiciary Committee (SJC) announced that the agenda for its executive business meeting on July 26 includes consideration of S 225 [LOC | WW], the "Access to Information About Missing Children Act of 2011", a bill that would have greater impact than its title suggests.

Sen. Amy Klobuchar (D-MN) introduced this bill on January 31, 2011. The cosponsors are Sen. John Cornyn (R-TX) and Sen. Patrick Leahy (D-VT). The SJC has not held a legislative hearing on this bill. None of the cosponsors wrote a statement for the Congressional Record. The same three introduced a substantially identical bill in the 111th Congress, S 4042 [LOC | WW]. The SJC took no action on that bill. 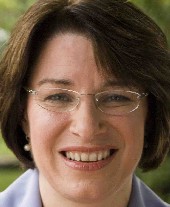 However, Sen. Klobuchar (at right) states in a page in her web site titled "Families and Children" that "I authored the bipartisan Access to Information about Missing Children Act with Republican Senator John Cornyn of Texas to help federal, state, and local law enforcement locate missing children whose whereabouts could be discovered though basic information on federal tax returns." (Emphasis added.)

Nevertheless, the bill makes no reference to tax returns, the Internal Revenue Service (IRS), or the Internal Revenue Code (IRC). It applies to information held by all federal agencies. This may be a consequence of the Byzantine politics of the Congressional committee jurisdiction system. As a result, if this bill were enacted into law, it would affect the confidentiality of records at every federal agency.

Supporters of the bill outside of the Congress likely seek a federal bill that would have the effect of amending the IRS confidentiality regime contained in 26 U.S.C. § 6103. However, the three sponsors of the bill are all members of the Senate Judiciary Committee (SJC), and may be trying to enact a bill that would in effect amend the Internal Revenue Code, but via the SJC, rather than the committee with jurisdiction over the IRC and the IRS, which is the Senate Finance Committee (SFC).

Section 6103 is a massive and carefully crafted legislative work. It prints out at 40 pages with single spacing. It contains over 20,000 words. An even vaster body of IRS rules, bulletins, publications and forms implement and supplement this section. The starting principle is that "Returns and return information shall be confidential". Section 6103 then sets exceptions.

It allows access for intelligence agencies, federal law enforcement, state law enforcement, and non-law enforcement government agencies. This body of law prescribes which entities can gain access to information, what information they can obtain, what purposes they must possess, what showings they must make, and what procedure they must follow. This section also contains checks and safeguards against abuse, and loss of taxpayer information.

S 225 makes no reference to the IRS or IRC. Instead, it is styled as an amendment to the criminal code. It does requires that an application be made to a federal judge or magistrate. However, the bill does not limit the information available to location information. Nor does it include the many checks, limitations and safeguards contained in Section 6103. As a consequence, jurisdiction over S 225 lies in the SJC, and not the SFC. But, in so doing, the bill would not only substantially undermine the entire IRS confidentiality regime, it would undermine confidentiality at every agency in the federal government.

Individual income tax returns filed with the IRS provide the name and address of the filer. And, if the filer claims any minor children as dependents, the return would also contain the names and social security numbers (SSNs) of such children. SSNs are unique identifiers that facilitate quick searches of electronic databases. Thus, when a parent of a minor child seeks to locate and gain possession of a child from the other parent, or a state or local law enforcement agency attempts to do the same, it would be helpful to be able to find out from the IRS the address of the parent who has listed that child on a tax return. For example, a state or local law enforcement agency could submit the name and SSN of a child to the IRS. The IRS could inform the agency of the name and address of any filer who listed that child as a dependent. The IRS could easily facilitate the return of a children to the parent who has been awarded custody by a court, when the other parent has violated that custody order.

Various online statements by proponents and others also suggest this is the purpose of the bill, and would be the effect of this bill. Moreover, some clauses in S 225 are identical to clauses in Subsection 6103(i). The drafter of S 225 had Section 6103 in mind.

In cases involving abduction of children for purposes of rape or ransom, waiting for next year's tax filings would be of little use. However, in cases involving investigations of violations of state court custodial orders by otherwise law abiding parents, and tax paying parents, IRS databases and records could be useful in locating children, and returning them from the parent in possession, to the parent with legal custody.

S 225 would have the effect of aiding state and local law enforcement agencies in enforcing child custody orders. Also, by locating such parents, it would aid in the enforcement of orders for the payment of child or spousal support.

If S 225 were enacted, IRS information would become an integral part of state divorce, child custody, and financial support legal regimes. However, since S 225 is written with reference to the entire federal government, and not just the IRS, and also would give federal agencies broad access to information of other federal agencies, the state child custody impact could be just one impact of this bill.

For example, S 225 would apply not only to the IRS, but also to "any information held by any Federal agency". Federal employment records, military records, travel records, and health records would be accessible. The only two exceptions would be for information that "would identify a confidential informant or seriously impair a civil or criminal investigation".

For example, S 225's clause, "information held by any Federal agency", would include information held by the U.S. Patent and Trademark Office (USPTO). S 225's clause, "Notwithstanding any other provision of law", would mean notwithstanding 35 U.S.C. § 122, which provides that "applications for patents shall be kept in confidence by the Patent and Trademark Office". The USPTO could be one of many federal agencies compelled assist thousands of state, county and municipal authorities seeking to locate parents in custody and support matters.

Moreover, while S 225 provides for access by state and local law enforcement agencies to limited information ("the name and mailing address of the individual") and for the limited purposes of looking for a "missing or exploited child", S 225 would give federal agencies much broader access. The bill provides that any "Federal officer" may access "any information held by any Federal agency". There is no limitation as to name and mailing address.

The bill provides that a federal officer may access information if there is a matter that pertains "to the enforcement of a Federal criminal statute relating to the case of a missing or exploited child". Moreover, while the matter could be a criminal investigation or a judicial proceeding, the matter could be merely an "administrative proceeding".

Moreover, the clause "criminal statute relating to the case of a missing or exploited child" is a term of art that also encompasses cases that do not involve children.

S 225 would create a new section in the criminal code titled "Disclosure of information relating to a missing or exploited child". It would place this new section in Title 18, Chapter 110, which pertains to "Sexual Exploitation and Other Abuse of Children". Thus, S 225 would enable access to information pertaining to any of the crimes codified in Chapter 110.

The Department of Justice (DOJ) under President Bush and Obama has vigorously prosecuted people who view child pornography online. S 225 would provide prosecutors access to more data to track down CP viewers.

Presidential candidate Mitt Romney has stated that he will also vigorously enforce the criminal ban on obscenity, which is largely ignored by the Obama DOJ. S 225 would give federal prosecutors in a Romney administration access to a wide range of federal records in their efforts to locate and convict people who operate obscene web sites.

However, perhaps the most notable aspect of this bill is the ease with which any "Federal officer" could obtain access to federal records. S 225 contains no limitation that only federal prosecutors may request access. There is no requirement regarding the seniority of the person making the request. There is no requirement that anyone submit a statement under oath.

Applications and orders would be ex parte, thus preventing the agency in possession of the records from presenting arguments in opposition.

There is no disclosure requirement. The bill does not require that persons whose records have been accessed be notified -- not even long delayed notice. In criminal proceeding, this would raise due process issues. Also, without such notice, a person who seeks to challenge the statute, or an agency practice, would not be able to prove standing to sue.

Sen. Klobuchar, the sponsor of this bill, does not have a record as a privacy advocate, unlike the other Senator from Minnesota, Sen. Al Franken (D-MN). She is a member of the SJC and Senate Commerce Committee (SCC), which have jurisdiction over most of the many pending bills that would impact privacy. But, she is a sponsor or cosponsor of few.

Sen. Cornyn, the lead cosponsor of S 225, does not have a record as a privacy advocate either. He is a member of both the SJC and the SFC, which would have jurisdiction over a clean bill to amend Section 6103 of the IRC. He could have introduced and used his position on the SFC to push such a bill. But, he has not.