April 14, 2008. Several bills have been introduced in the House and Senate that would remove "any cellular telephone (or other similar telecommunications equipment)" from the enumeration of "listed property" under Section 280F of the Internal Revenue Code.

At issue is whether the Internal Revenue Service can treat the use of cell phones and other devices paid for by employers as income to employees, as well as record keeping and data retention requirements imposed upon employers and employees.

On February 14, 2008, Rep. Sam Johnson (R-TX) introduced HR 5450 [LOC | WW], the "Modernize Our Bookkeeping In the Law for Employee's Cell Phone Act of 2008" or "MOBILE Cell Phone Act of 2008". There are currently 36 cosponsors. It was referred to the House Ways and Means Committee, of which Rep. Johnson is a senior member.

No action has been taken on any of these bills. However, the House Democratic leadership has scheduled floor consideration of HR 5719 for as early as April 15, 2008. See, Rep. Hoyer's schedule for week of April 14.

No hearings have been scheduled for any of these bills. TLJ spoke with one Hill staffer who stated that no hearings will be necessary, because this is "a slam dunk stupid issue". That is, there is such broad, bipartisan and bicameral support that if the IRS does not back down, the Congress will pass legislation without formalities.

Legislative History. On August 18, 1988, then Vice President George Bush gave a speech at the Republican National Convention in which he said "Read My Lips: No New Taxes". He won the Presidential election in November of 1988.

He then proceeding to raise taxes, beginning with the "Omnibus Budget Reconciliation Act of 1989", or "OBRA 1989", but more substantially with the OBRA 1990. He was a one term President.

One of the things that the OBRA 1989 did was tighten tax rules to limit the ability of large corporations to pass off benefits for top executives as business expenses. One section related to the use of the then nascent and expensive technology of cell phones. The effect of the bill was that companies and their executives had to keep detailed call records to demonstrate that cell phones were actually being used for business purposes in order to depreciate the cost of the equipment and expense the cost of the telecommunications service.

(a) GENERAL RULE- Subparagraph (A) of section 280F(d)(4) (defining listed property) is amended by striking `and' at the end of clause (iv), by redesignating clause (v) as clause (vi), and by inserting after clause (iv) the following new clause:

`(v) any cellular telephone (or other similar telecommunications equipment), and'.

(b) EFFECTIVE DATE- The amendment made by subsection (a) shall apply to property placed in service or leased in taxable years beginning after December 31, 1989.

Back in 1989 cell phones were prohibitively expensive for all but a few people. Hence, few people used them, and the burden of keeping records was minimal relative to the cost of the equipment and service.

§ 7643 maintained the government's ability to soak the rich.

They would both remove the clause "any cellular telephone (or other similar telecommunications equipment)" from 26 U.S.C. § 280F(d)(4).

These bills provide that "section 280F(d)(4) of the Internal Revenue Code (defining listed property) is amended by ... striking clause (v) ..." (Parentheses in original.)

HR 5719 (Rangel) is a bill timed to coincide with a tax filing deadline. It enables House members to make speeches, take positions, and cast votes on a measure, and then assert to their taxpaying constituents that they are concerned about tax levels and tax procedure.

There is no companion bill to HR 5719 (Rangel) in the Senate.

Bills Sponsors' Explanations. Rep. Johnson stated in the Congressional Record that "A law was put in place in 1989 to require that detailed log sheets be kept by employees of their cell phone use in order to document their business use. Those rules made sense back then."

"Clearly, time and technology have marched on and companies give their employees cell phones and BlackBerrys with unlimited minutes. And these communication devices are really just an extension of the business day and place to anywhere at any time."

Rep. Johnson (at right) continued that "The IRS wants employees to keep detailed call sheets or be forced to include the value of cell phones and BlackBerrys in their pay. The law needs to be brought up to date with the fact that the office cell and BlackBerry is just an extension of the phone on an employee's desk. Employees and employers have better things to worry about than keeping detailed logs of calls only for tax purposes."

Rep. Johnson also wrote a dear colleague letter [PDF] on February 12, 2008, in which he stated that "A log listing every call, time and purpose must be kept for the cost of the cell phone to be deducible."

He said that under the statutes, "listed property is property that inherently lends itself to personal use, such as automobiles". Moreover, in 1989 the "Congress was skeptical about the daily business use of cell phones". 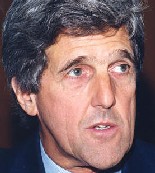 But, Sen. Kerry (at left) said, "Technological advances have revolutionized the cell phone and mobile communication device industries. Twenty years ago, no one could have imagined the role BlackBerries play in our day-to-day communications. Cell phones and mobile communication devices are now widespread throughout all types of businesses. Employers provide their employees with these devices to enable them to remain connected 24 hours a day, seven days a week."

He explained the need for legislation. Recently, the IRS "reminded field examiners of the substantiation rules for cell phones as listed property. The current rule requires employers to maintain expensive and detailed logs, and employers caught without cell phone logs could face tax penalties."

Sen. Kerry said that the bill "updates the tax treatment of cell phones and mobile communication devices by repealing the requirement that employers maintain detailed logs. The tax code should keep pace with technological advances. There is no longer a reason that cell phones and mobile communication devices should be treated differently from office phones or computers."

Reaction. Steve Largent, head of the CTIA, stated in a release on February 13 that the IRC's "treatment of wireless devices is hopelessly outdated and fails to reflect the integration of wireless technology into American businesses."

He continued that "Thanks to wireless technology, the days of the desk-bound employee are long gone. Today’s worker carries ‘the office’ in the palm of his or her hand and has the freedom to conduct business on the go. The tax code should be written and enforced in a way that enables, rather than discourages, businesses to embrace the benefits of wireless technology."